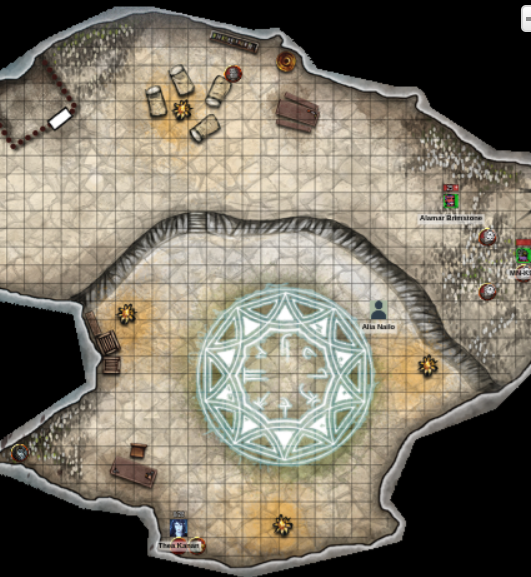 I woke up 15 minutes later inside a bloody cave bear’s guts. No one found me so it all went according to plan.

So all of my friends… well they weren’t really friends… are dead. I can say that now that they are dead, right? They were useful, and now they are not useful. Well, not completely useless yet; let me go check their bodies for useful stuff. Back in 5 minutes.

OK, now they are completely useless as well as being dead, except for Creg, who is alive but almost completely useless because he is unconscious and bleeding. I’m really not sure what I can do to help him. I refuse to kiss him like in the first aid classes I pretended to take because of that hot half-elf. The only useful things the others had were money and a set of lockpicks on Alia’s body. Some “friends” they are. “Friends” means useful, right? Definitely no longer useful. Neither are the derro, their bodies didn’t even have any money on them.

Since I was no longer in immediate danger of death I went to look inside the circus again. No more bears or derro, but some of the cages had people in them. I snuck into the room, looking for anything interesting, but the people in cages kept shouting at each other and waving their hands in the air. Finally one turned into a snake and slithered out of the cage right towards me, so I made sure to hide behind a pillar. For some reason one of them kept calling to be let out of the cage! No idea who he was talking to, maybe the snake, but eventually the shouts got annoying and were going to draw attention, so I walked over and asked if she wanted to be friends. (“Are you useful?” means friends, right? Or am I supposed to say friends and mean useful?) Anyway she claimed she could heal people, so I insisted she demonstrate on me before I let her out. She did, so I opened the cage on like the first… second… ok third try. New set of lockpicks.

The snake and the genasi kept talking about weed and getting high. Is that like flying? I tried some and didn’t fly. Maybe if I point my eldritch blast at the ground? I’ll have to try that later.

Anyways after my new friends healed me I remembered Creg was outside in the corridor dying in his own blood covered in derro and bear corpses and stuff, so I brought him into the cave with the cages. That way if he wakes up I can claim I’ve been taking care of him like a good friend. Friends are useful; they die instead of me and if I’m almost dead I can eat their soul. It’s sort of like making friends with emergency rations. You don’t really want to eat them and they don’t taste very good, but you’re glad you kept them around, just in case.

So eventually Creg woke up when my nice new emergency rations healed him. He promptly muttered something about a long rest and went back to sleep. I did too. Being the only survior is tiring! Well, I guess Creg survived too but only because I remembered to drag him into the cave. I saved his life doesn’t that mean I own him now or something? I’ll ask him when he wakes up again. “HELLO CREG! GOOD MORNING! I SAVED YOUR LIFE! DO I OWN YOUR SOUL NOW?” I hope he says yes, that would be so much fun.

One of them wanted the derro’s hat with its funny tails. Weird. I guess it is a nice hat.

Anyways Drogi the derro led us into an ambush with quasits. We killed some but more of them fled into a larger cavern. I couldn’t see much. There was an Ettin. I had to climb a wall to see that, and I couldn’t even blast it with just one hand. I could, however, throw some handy alchemist’s fire on it, which eventually killed it, maybe? I really can’t see much besides Soggy’s buttcrack. Not even a good buttcrack. I contemplated twerking for Faolain who was stuck behind me but I hadn’t even had the chance to try to seduce her properly yet so it didn’t seem like the time.

Eventually the ettin died and we broke out into the larger cavern and killed most of the other things there too. Next up: find out what Drogi knows!

I woke up in a cage. I remember the raid by the derro and being overwhelmed. I must be in the Underdark. Granted, I wanted to be in the Underdark anyway, but being taken by those vermin is humiliating. Anyone who saw it has to die, so nobody lives to contradict my story that I let them take me so I could continue my mission. There were two other creatures in cages in the room, but the other cages were empty, and there were no derro. One was a giant barbarian named Primrose that oddly enough had halfling features, and the other a genasi, water by the way he dripped. He said his name was Soggy, appropriately enough. He had been sleeping, and apparently whatever woke me up woke him up too, because he changed into a snake and went into the giant’s cage. Druid, then, and apparently stupid as all nine hells, or he could have tried to free me and Prim instead of slithering over to visit her. Oblivious to the option to get free, he and Prim happily started smoking something from a pipe. They probably saw me be taken. They’ll have to die at some point.

About that time, a tiefling wandered in. He fancied himself to be sneaking, and ignored all of us calling to him to let us out. When he realized we could see him, he gave us the “who me?” look cats give you when you catch them doing something dumb. Pretty, but empty head, perfect. I told him to let me out, and he had the gall to ask me what he got out of it. He looked a bit worse for wear, so I said I’d heal him. He asked me to swear on my soul. Enterprising twit, I’ll give him that. I said I swore by my goddess, and that satisfied him, so he let me out. The other two offered him a hit from the pipe, and he let them out for that. He really is dumb. After smoking, he turned to me and demanded his healing. I prayed and cast one spell. I could have healed more, but he didn’t deserve it. He introduced himself as Alamar. He didn’t see me get captured, so he can live until he stops being amusing. It seemed that he and his previous companions had gotten into a fight with the derro and bears that used to be in this room, and only he survived. Bears. I said a brief prayer of thanks for their sacrifice, since it meant I wasn’t trying to figure out how not to be bear food.

We collected our gear from a pile in the corner and started out down a tunnel. We were promptly attacked by quasits. I cast a sphere around us to heal us, and the others made short work of the things. I wonder what they’re doing down here. This isn’t usually demon territory. Then, Alamar spotted a derro running past us, and said something about needing to get it for a mission, and everyone ran off. I got everyone around me during the run and gave everyone extended infravision so we could get the jump on whatever else was down here. The tunnel ended into a large open room. I caught a brief glimpse of more derro, one attempting a ritual, a devil dog, and an ettin, before Prim backed up and blocked us all in the tunnel. Alamar tried climbing a wall at one point, and Soggy turned into an eagle. It was galling to not be able to see what was going on, but apparently they all did something, because they moved out in the room. The ettin and the devil dog were dead, and they were working on the derro. I put three derro to sleep, healed Prim, and helped bring down the caster. I think there were more quasit in there somewhere. I remain disturbed by the presence of demon ilk here.

Prim looks ragged, so I should heal her back up. She’s an exceedingly good meat shield, and I need her to stay that way for a while yet. Then we need to kill the sleeping derro, and interrogate the derro Alamar wanted, who is cowering in the corner. I’m looking forward to the interrogation, since Alamar didn’t seem the slightest bit distressed when I asked about more … severe … methods of interrogation. All we need to do is keep it alive, at least long enough to get whatever information Alamar wants. I can keep it alive and screaming for a really long time. Not a problem. Soggy looks squeamish about violence outside of combat necessity. Maybe we can send him and Prim scouting while we take care of that business. Or just let them get stoned enough that they don’t notice. I suppose we could gag the derro during the “interrogation,” even if it would smother the lovely screams.