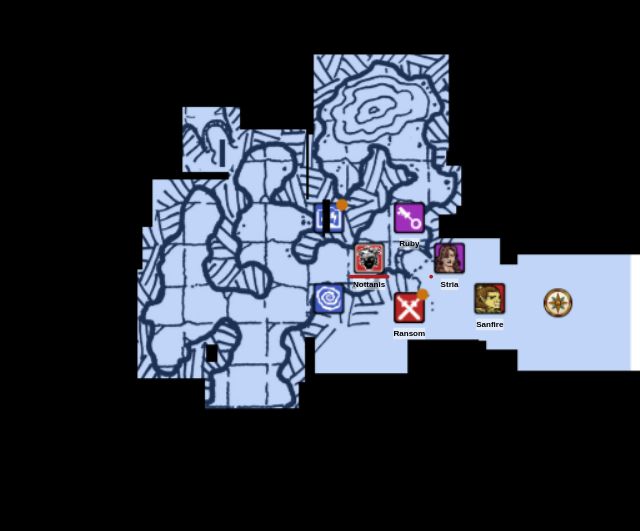 We set off towards Threshold, planning to cut through the forest to make better time. Our plan was foiled by the mold, or pudding, or ooze, or slime, or whatever it was. It simply moves slowly. So slowly that it took days to travel a few miles. And every single day was a nervewracking exercise in wondering if the spell had worn off yet, not to mention watching it all night to make sure it didn’t eat Rowen, Sanfire, or Stria. The magic protects me, not my companions, apparently.

Also it doesn’t protect my boots. Or my backpack. Or my belt. Or my pants.

We’re only a few miles closer to Threshold and already I’m a nervous wreck. Elvish serenity can eat my perky elvish ass, but it better hurry before the pudding gets there.

We met four goblins fleeing a large lizard. Everyone hid but me and Rowen. Rowen thought she was hiding until I started talking to her. Even the pudding hid, despite me encouraging it to eat the fresh goblins appetizers and the lizard entre. Between my arrows and Rowen’s illusionary magical attacks, we drove off the lizard, but not before it killed the goblins. They had a few coins, and one platinum piece the goblin seemed to consider special. Their most valuable treasure was inside them all along, though. The pudding ate well.

We discussed making a sled to drag the puddling with, but it doesn’t seem like it would be much faster.

We’re going to have to send someone ahead to have a container made and maybe get the cart.