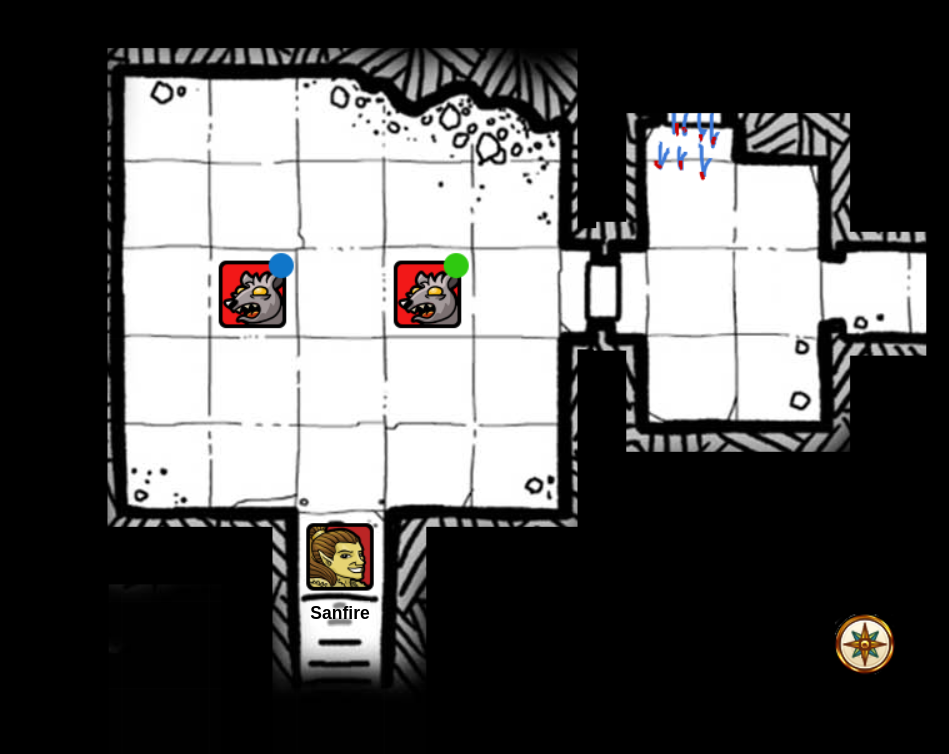 We retreated to the surface and arranged to spend a few days at the Druid and Whale recuperating. u-Heury wandered off to tell his tribe about his innovations in urban barbarism, and the by some ill fortune his replacement was a halfling named Sanford. I didn’t know him well and it soon becsme obvious that the lazy little shit deserved every bit of my dilligent efforts to avoid him. The first thing he did when he arrived was sell half his equipment to fund a party in some other inn without inviting us. (To be fair, I’m not sure how he moved while carrying so much, but after the party he had surely replaced the weight in food and drink). At least he kept his silver spear.

Our torchbearer also left, a decision I understasnd completely. I wouldn’t carry a torch for any of us no matter how much I was paid, and torchbearers aren’t paid much. The cleric stayed, at least. Maybe he will memorize a useful spell this time… or maybe not.

After Sanford spent even more time and money getting drunk in our tavern and attempting to entice a new friend to join us, he eventually stumbled into bed. I followed, more to watch his coin purse than anything else, Ygnas was already in bed. She had mentioned feeling unwell earlier in the evening. All went smoothly until I heard a knocking on my door well past midnight – a now very hung over halfing and a visibly terrified Ygnas, both in nightclothes. (I perhaps dignify Sanford’s garb more than it deserves; it resembled a diaper more than anything else). I let them to find out what was wrong, hoping for nothing more exciting than a bad dream.

Alas it was much, much worse. Ygnas reported dreams of the moon, of hair and teeth and claws. Wolfsbane made her sneeze and itch. Silver was actively painful. The conclusion was made obvious when, for a moment, she lost her temper and grew claws, teeth, and whiskers.

Luckily my lady Closea had provided for this event, despite playing hard to get with her blessed sword Verminbane. For the first time I regretted my dalliances with camp followersa and guard-chasersl perhaps I would already be worthy of her blade. But I digress. Closea, blessed be her name, had provided use with two potions. I surmised they must be meant to resolve the lycanthropy curse, and Ygnas downed one promptly. Experimentation the next day suggested the issue had been resolved.

We might be wise to make arrangements for a cleric with the necessary knowledge to be available, should we use the other potion and still have need of more.

Even the trip to the sewer entrance was not without problems. Sanford got distracted watching a cockfight, and then apparentlyu got paid to distract the guards. That’s what he told me later on. What I actually saw was him running up to look at the commotion, then hide and pick up a rock, aiming at the approaching guards. I called out for him to stop, pretending he was my son, hoping that might get him out of minor trouble. Instead he turned and threw the rock right at me! I took the hit full on, not expecting my ex-friend to throw a rock full force at my face, and not expecting to need a helmet while walking through a city. I was wrong on both counts. The rock knocked me over, and almost knocked me out. I faked the latter for the benefit of the guards, who were by now thoroughly distracted.

But I swear I will spank that damned halfling when I catch him.

When we finally made it into the sewers, the wererats had removed one of the handles to the control mechanism, presumably to prevent us going bacxk down. I repurposed the winch from a crossbow to turn the valve control. This trip may be our last, as they seem to have figured out how we are getting down and will surely take additional steps if we give them enough time.

The halfling does offer the advantage of stealth. He was able to scout the first room on the lower level, where the wererats laid an ambush for us, and ambush them in turn. He threw a bundle of wolfsbane straight into the open mouth of one of the waiting wererats. And now the fight is on!